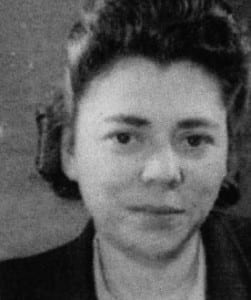 Rosa Bleich was born in Bochinia, Poland.  She and her husband, Nuchem, and two daughters, Sabine and Hadassah, lived in The Hague until the spring of 1942.

When times became dangerous for the Jews, she and her family tried to flee their home for Switzerland.  Rosa and her family hid in Belgium for almost two years, but they were caught and then arrested.  Rosa, her husband, and her daughters were taken to a jail in Brussels for six weeks.  Upon leaving the jail, Rosa and her husband were sent to a transit station in Malines before being transported to Auschwitz.  In December of 1944, she was separated from her husband and transported to Bergen Belsen.  Her daughter, Sabine, says, “If they would have stayed in Auschwitz, they might have survived since Auschwitz was liberated one month later.”

Rosa and husband did not survive the Holocaust.  She is survived by her daughters, Sabine and Hadassah.  Sabine volunteers her time at the Holocaust Museum and Education Center of Southwest Florida to share her family’s story.