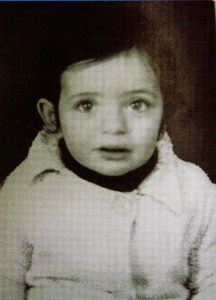 Renee Fritz as a young child

Renee Fritz was born in 1937 in Vienna as Renee Schwalb. She was two years old when the war broke out. Renee’s mother was a clever and determined woman. She sent Renee on a Kindertransport to Belgium and—after Renee’s father was sent to Dachau—Mrs. Schwalb managed to relocate Mr. Schwalb to the United States. Later Renee’s mother joined her in Belgium.

Mrs. Schwalb befriended a devout Catholic woman named Bertha Degelas. Mrs. Degelas and her husband hid thirty Jews in their apartment. Renee frequently cried so Mrs. Degelas sent her to a convent so as to not draw the Gestapo’s attention. Later, Renee learned that the house had been raided by the Gestapo and the residents were sent to Auschwitz and the gas chambers. Fortunately, an officer has recognized Mrs. Schwalb from school and saved her from the gas chambers.

For Renee’s safety, Mrs. Degelas took Renee from the convent and to a farm. When people became suspicious she was then moved to an orphanage. After the Americans liberated Belgium, soldiers came and brought food for the children in the orphanage. Mrs. Schwalb survived Auschwitz and came to claim her daughter. Renee and her mother returned to Belgium.

In 1950 Renee’s uncles (who lived in America) applied for visas for Renee and her mother. Eventually, they were reunited with Renee’s father. Renee completed high school and went to Boston University. Renee was featured in a documentary and a book as well as various interviews.