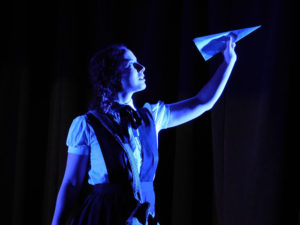 The play, In Flight: The Story of Sabine van Dam is another way the Museum presents a Survivor’s story to students.

In Flight: The Story of Sabine van Dam, is a professionally written and acted play that combines the acting and writing expertise of Gulfshore Playhouse with the historical knowledge of the Holocaust Museum & Cohen Education Center.

Complex enough to tell the story of local, part-time Naples resident Sabine van Dam’s harrowing Holocaust flight from the Nazis, yet simple enough to present to students in a classroom without props, the play equates to a Survivor talk’s ability to show students history in a personal light. 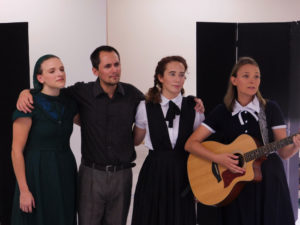 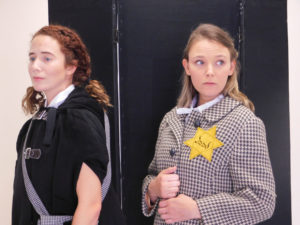 Lasting about the length of a typical classroom period, the play takes students along on Sabine’s family’s journey. They will see the family gathered together until the Netherlands are invaded. Students will see the family’s fear, hiding from Nazis, betrayal by a Collaborator and imprisonment. The family of four is then split up, with the parents going to Auschwitz and the two sisters going to separate camps. Follow the sisters as they miraculously reunite in an orphanage, and meet a heretofore-unknown uncle who hid in Switzerland during the war, and learn the fate of Sabine’s father and mother.

An introductory, pre-performance workshop, presented by a Holocaust Museum Educator, provides an overview of the Holocaust and gives glimpses and direction for what the students will see in the play. Options for a second introductory workshop are available. Following the play, time-permitting, the actors are available for a Q&A with the students. A final workshop is hosted by Gulfshore Playhouse, where they relate the play to the students’ current world.

For more information on scheduling a performance of In Flight: the Story of Sabine van Dam, contact Sam Parish, Director of Operations/Education Specialist, at Sam@hmcec.org or call 239-263-9200.