Fabric of Survival: The Story of Esther Niesental Krinitz As Told Through Her Needlework is a unique photographic display on the theme of Holocaust memory. Esther was a Holocaust Survivor from Poland and shared her remarkable story through the lens of her needlework.

Esther created 36 large-scale panels. Using colorful fabric collage and intricate embroidery, the panels dynamically depict stories of her life before, during and after the war. The high-definition photographs clearly show her masterful embroidery and design skills, which were self-taught. The exhibit’s timeline begins with imagery of 12-year-old Esther’s happy, pre-war family life and proceeds to illustrate the Nazi occupation of her village and country, the separation of Esther and her younger sister, Mania, from their parents and siblings, and the sisters’ subsequent life on the run to evade capture and imprisonment. It ends with scenes of Liberation and Esther’s post-war life in America.

Esther created the panels later in her life to provide her daughters with a visual context for the stories they’d heard growing up.  The majority were completed during a 10-year period, mostly hand-stitched, with an average of three to four months to complete. Because she had no photos, Esther relied on her memories for most of the images she created.

This exhibit is presented in conjunction with Art & Remembrance, a Maryland-based non-profit created by Esther’s daughters, Bernice Steinhardt and Helene McQuade. The organization (www.artandremembrance.org) was set up to bring their mother’s work and life story to a wider audience. Fabric of Survival has now been seen all over the U.S. and the world.  A documentary about Esther, Through the Eye of the Needle – The Art of Esther Nisenthal Krinitz, will be available for viewing during our exhibit. 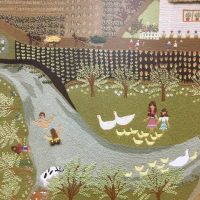 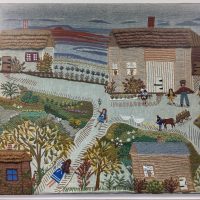 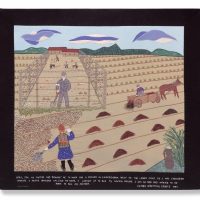 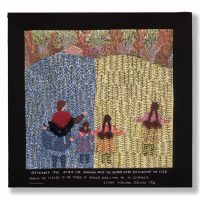