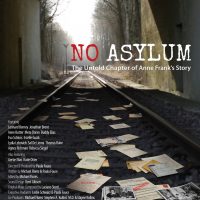 A new award-winning documentary is bringing to light a vital story about one of history’s darkest times. No Asylum: The Untold Chapter of Anne Frank’s Story explains how in 2005, an archivist at New York’s YIVO Institute for Jewish Research discovered a number of letters written in 1941 by diarist Anne Frank’s father, Otto. Sent to relatives, friends and various government officials, these urgent communiqués, describe Otto Frank’s desperate efforts to save his wife and daughters and escape Nazi-occupied Holland They also show the failure of the world to respond to the plight of Jewish refugees

Admission is free; reservations are required; to R.S.V.P., contact genshoahswfl@icloud.com.