We are pleased to present a special new exhibit – Art & Propaganda in Nazi-Occupied Holland. The exhibit will be on display in The Estelle and Stuart Price Gallery now through March 31, 2020. Art & Propaganda in Nazi-Occupied Holland was developed and is distributed by the Anne Frank Center for Mutual Respect in New York City (www.annefrank.com), which works to overcome intolerance through educational exhibits, workshops and performances.

The German invasion of The Netherlands on May 10, 1940 came as an unpleasant surprise for most Dutch citizens, who believed their government would keep the country neutral during the war, as they had during World War I. However, the quick capitulation of the Dutch army, and the hurried departure of the government and their Queen, Wilhelmina, to England left the country feeling shocked and dismayed. The exhibit will provide visitors with a unique perspective into the lives of Jewish and non-Jewish Dutch citizens during World War II.

The exhibit will feature examples of Dutch Resistance group art and official propaganda culled from three collections in the archives of the Anne Frank Center. 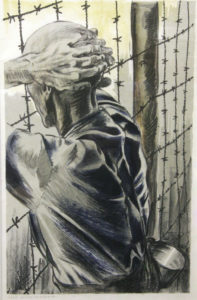 “Sketches from BUCHENWALD” (published by “Het Centrum” publisher, The Hague)

Eight original lithographs by Henri Pieck will be on display. Sketches drawn during Pieck’s internment at Buchenwald concentration camp evoke the harsh life in German concentration camps: forced labor, starvation, freezing cold and inhumane treatment. Henri Pieck was the twin brother of renowned artist Anton Pieck. Henri was not only a member of the Dutch Resistance; he became a militant communist and was later a spy for the Soviet Union. Among Pieck’s sketches will be:

“The Unattainable” showing a Buchenwald prisoner looking out behind a barbed wire fence.

“Soldier Returning From War – 1945” showing a joyful reunion in the foreground and Holocaust Survivors and war refugees in the background. 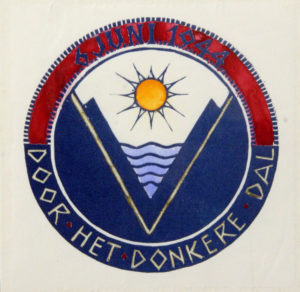 Twelve linoleum and woodcut prints by Marie de Zaaijer are included. These prints depict the remembrances, suffering and hardship endured by Dutch citizens during the war. Ms. De Zaaijer’s prints were presented to Queen Wilhelmina after the war. The artist provided a handwritten explanation with each one, providing the Queen with an eyewitness description of life in wartime Holland while she and her government were in exile. The Queen’s private secretary later conveyed a message to Ms. De Zaaijer – “The Queen has looked at your linocuts and is filled with admiration.” One of the works on display is:

In her notes Ms. De Zaaijer writes: “HM the Queen spoke in her radio address about ‘the dark valley’ we would have to go through, when shortly the invasion of Europe (When? Where?) Would take place.” Between two mountainsides one sees the open space of freedom light up, comprised in the colors red, white and blue.” 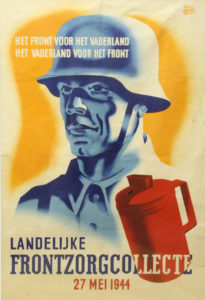 What is “propaganda”? Propaganda is information, especially of a biased or misleading nature, used to promote or publicize a particular political cause or point of view. The Netherlands received a full propaganda offensive from the German occupiers as well as the NSB, the homegrown Dutch Nazi party. Propaganda posters distributed by the Nazi-controlled Dutch government encouraged the Dutch population to support the “heroic struggle of the German Wehrmacht against the dark forces of Bolshevism.” The risks for Dutch citizens who resisted the Germans during the occupation and were discovered were severe – death or internment in a concentration camp.

Eight original propaganda posters, distributed by the Nazi-controlled Dutch government, are included in the exhibit.The posters promoted a variety of subjects and government policies. They encouraged the Dutch population to support the occupying German forces. Other posters castigated the Allied Forces for the indiscriminate American and British bombing raids which killed and injured innocent Dutch citizens as well as armed combatants. Still others noted the long history of English/Dutch wars, and the seizure of Dutch colonies for use by the Allies. Among the propaganda posters on display will be:

Nationwide Collection for Frontcare 27 May 1944. Dutch citizens were encouraged to contribute to a fundraising effort to support the expenses of the German army occupying Holland.

An event every week that begins at 12:30 pm on Tuesday, Wednesday, Thursday and Friday, repeating until March 31, 2020

An event every week that begins at 1:00 pm on Sunday and Saturday, repeating until March 31, 2020